Scheduled to release on September 18th, Darrell Pitt’s The Boy from Earth is a sci-fi adventure story aimed at ages 8-12. 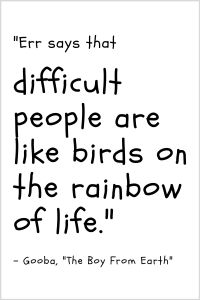 If you love Guardians of the Galaxy, you’ll love The Boy From Earth by Darrell Pitt. It’s a fast-paced, boot-camp-flavored adventure filled with humor, heart, and unforgettable characters.

The tale follows Bobby Baxter, the first person from Earth chosen to join the Galactic Space Academy, as he learns to expect the unexpected. He and his friends investigate a conspiracy they believe is linked to the sabotage of Bobby’s spacecraft. But, in the end, they uncover a far more dangerous plot. Will Bobby find the courage to prevail, even against those working to ensure he fails?

My eleven-year-old son and I thoroughly enjoyed this book. It’s one we could read over and over again.

You can pre-order a copy of The Boy from Earth here.

(I requested a free advanced copy of The Boy from Earth from the publisher to read and review, without any obligation or formal request to do so.)

Twelve-year-old Bobby Baxter’s not the bravest kid on Earth. His list of things that scare him is up to number 689, and includes lightning, crowds, spiders, alien abductions, crocodiles, falling from great heights, falling from small heights and… eggs. So when he learns that he’s the first Earthling ever chosen to attend the Galactic Space Academy, light years away from home, he’s terrified―and that’s before he discovers that someone at the academy wants the boy from Earth gone.

I’ve wanted to be a writer ever since I had some positive feedback from a teacher in high school. Rather than becoming the next Stephen King I became a husband and a father instead and I’m fortunate to have such a wonderful family.

I recently signed an 8 book publishing deal with Text Publishing. It will see most of my self-published books re-released with the first, The Firebird Mystery, due out in February 2014.

I lived most of my life in Sydney, Australia before moving to the South Coast of New South Wales for a number of years. I currently call Melbourne my home (it’s a fantastic city – you should visit if you get a chance!)

I enjoy writing young adult novels. I like fast paced action stories populated with interesting characters and I hope my writing reflects this.

My other interests include Star Trek, Harry Potter, The Hunger Games books and chocolate. Always chocolate. I’ve never met a chocolate I didn’t like. One of the big loves of my life is Toastmasters. Have a look at my club’s website: